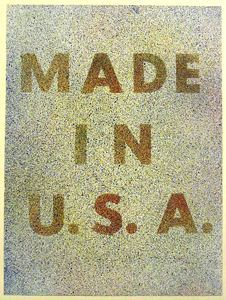 1974
From the Kent Bicentennial Portfolio, Spirit of Independence


Early in his career, Ed Ruscha began a series of paintings that incorporated words in a variety of fonts, from block letters to words that look like liquid. This technique became Ruscha's signature style and stemmed from his experiences working in advertising. Although early on Ruscha had much in common with Pop artists, he aligned himself with the ideals of Conceptual art. Like Conceptualists, Ruscha believed that the idea is what constituted the work of art. Furthermore, Conceptual art celebrates structure, the mundane, and serial imagesâideas that Rusha explored through his deadpan works of art.
In the early 1970s, Ruscha began extensively working in printmaking. After his initial experience at the Tamarind Lithography Studio in 1969 he became excited about the possibilities of this art form. "America Her Best Product" from the Kent Bicentennial Portfolio, Spirit of Independence is an early example of Ruscha's printmaking, an area that he has continued to work in throughout his career.

Your current search criteria is: Object is "America Her Best Product".