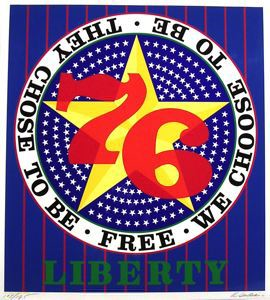 1974â1975
From the Kent Bicentennial Portfolio, Spirit of Independence


Robert Indiana considers himself a 'realist who paints real signs.' Influenced by popular culture, he became associated with the Pop Art movement in the 1960s, a style that he continues to work in. Indiana's bold and graphic paintings, prints, and sculptures combine letters or numbers in ways that often have political or social associations. For example, "Liberty" created as part of the Kent Bicentennial Portfolio: Spirit of Independence, clearly references the American Revolution, which brought this country independence from the British in 1776. While working with themes that resonated with the 1970s era, his Pop sensibilities also demonstrate how art movements meld from one decade to another, often without clear demarcation lines.
What was new in the 1970s for Indiana, however, was that, after much success with early sculptural works, he turned almost exclusively to working with the screen-printing process for a period of time.

Your current search criteria is: Object is "Liberty ".