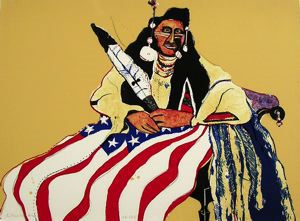 1974â1975
From the Kent Bicentennial Portfolio, Spirit of Independence


Fritz Scholder was one-quarter Native American, part of the LuiseÃ±o tribe of Mission Indians in California. Although he did not consider himself to be Native American, in the 1960s and 1970s Scholder created works that redefined images of Native Americans. Scholder removed the romanticized mystique of previous depictions; instead, he created images that combined his interest in Pop, Surrealism, and Abstract Expressionism with observations and research to forge his own vision of Native peoples. For these reasons, many regard Scholder as the leader of the New American Indian Art movement.
The print, "Bicentennial Indian" from the Kent Bicentennial Portfolio, Spirit of Independence shows Schloder's image of a Native American wrapped in an American flag. He based the imagery upon a nineteenth-century photograph depicting imprisoned Native Americans draping surplus flags around their body in place of their removed traditional tribal clothing.

America Her Best Product
1976.0161
Portfolio List Click a portfolio name to view all the objects in that portfolio
This object is a member of the following portfolios:

Your current search criteria is: Object is "Bicentennial Indian".