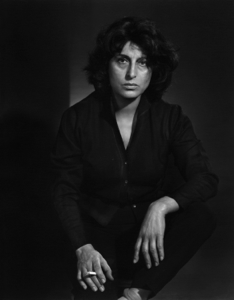 
Anna Magnani (1908â1973) The great Italian film actress was particularly noted for her fiery temperament and impassioned performances. She began her film career in 1934 with The Blind Woman of Sorrento and had the leading role in Open City (1945). She won an Academy of Motion Picture Arts and Sciences award for The Rose Tattoo (1955). The dark background and brooding expression of the actress give this portrait an overwhelming intensity. Karsh requested and confirmed the portrait sitting by wire in one day prior to leaving Canada for several weeks of intensive work in Europe.