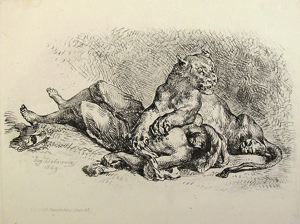 
Images of lions and tigers in mortal combat with their prey, other felines and humans were common in Delacroixâs work in the 1840s and 1850s. Like his friend, the sculptor Antoine-Louis Barye (French, 1796-1875), with whom he studied wild animals at the Museum dâHistoire Naturelle in Paris, Delacroix was fascinated by the terrifying nature of these fights to the death. The emotion of these epic battles and the exotic settings of African wildlife excited contemporary audiences steeped in the Romantic spirit of the age. Delacroixâs drawings, paintings, and prints of big cats enjoyed critical acclaim and commercial popularity around mid-century, culminating in his last large salon successâ"The Lion Hunt" (1855, Nationalmuseum, Stockholm).

Delacroix produced this etching in 1849, after the salon success of a smaller oil painting of a feline subject, "Lion Mauling a Dead Arab". The artist also painted a watercolor of the same scene at about the same time. For this etching, published by Marchand, Delacroix depicted a female lion rather than the male shown in his watercolor and salon oil, and he minimized the setting, depending solely on hatching and cross-hatching to shade the background and highlight the fearsome eyes of the vicious cat that claws the chest of a dead Arab

Keywords Click a term to view the records with the same keyword
Male
Lion
Death
Shoes
Turban
Portfolio List Click a portfolio name to view all the objects in that portfolio
This object is a member of the following portfolios:

Your current search criteria is: Keyword is "JV".