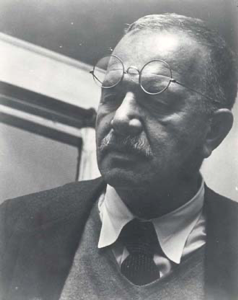 (2) "Well, the first thing that I can remember I drew, and it was natural that as soon as I could have access to coloring material, I colored whether it was crayon or watercolor. Now when I was a youngster of about twelve, I looked upon oil as the very highest thing, and begged for oil paints. But with experience, I revalued all those things. But I did think of myself as an artist, awfully young." (Ben Shahn in Morse, 1972, p. 42).

(7) A definitive collection of Shahn's graphic work is housed in the New Jersey State Museum. A computerized archive of articles, books, and other information on Ben Shahn's career has been established by Dr. Stephen Lee Taller, 743 Spruce Street, Berkeley, California, 94707.

(9) Excerpts of all these texts, the full text of Love and Joy About Letters, and excerpts from interviews and lectures by Ben Shahn are reproduced in Ben Shahn, John D. Morse, editor, Praeger Publishers, New York, 1972.

(11) Well, I am actually more inclined to [start] with images. And I keep notes. And the notes are made half in little images and half in single words. A kind of shorthand of image words, if you wish. But I certainly do not have a complete image because if I had a complete image I think I would lose my interest in it. The area of discovery, the area of exploration that exists in painting is to me the most intriguing and the most rewarding one." (Ben Shahn in Morse, 1972, p. 43).

(14) "Ben was a storyteller, and his art must necessarily reflect storytelling. He loved the great biblical figures and the mythological ones and had invented his own menagerie of mythical beasts and creatures. Story was for him a source of multitudinous images, an inexhaustible museum of shapes, objects, and personages." (Bernarda Bryson Shahn, 1972, p. 74; see also Getlein, 1968 and Prescott, 1982).

(15) "It is my belief that the work of art is a product of the human spirit and that, conversely, the function of the work of art is to broaden and enrich the human spirit" (Ben Shahn in Morse, 1972, p. 203).
(16)"His concerns moved him easily into the realm of activism, and he was eager to have his art feed directly into the tributaries that alter and quicken society's meandering flow. When he focused on the ills of society, it was not in bitterness but in the hope of eradicating these obstacles to the fulfillment of the American dream." (Prescott, 1982, p. v).
(17) Ben Shahn in Morse, 1972, p. 79.
(18) "Ben Shahn's art stood somewhere between the abstract and what is called figurative, borrowing from the one its material riches of color, shape, and texture, its explorations in form, its preference for inner organization as against outer verisimilitude, from the other its focus upon man as the center of value and as the most interesting object on earth." (Bernarda Bryson Shahn, 1972, p. 15)
(19) Bernarda Bryson Shahn, 1972, p. 76.

In Rooms Withdrawn and Quiet

To Parents One Had to Hurt

Mornings by the Sea

The Gestures of the Little Flowers

How the Birds Fly

One Must Know the Animals

The First Word of Verse Arises

Screams of Women in Labor

Memories of Many Nights of Love

Nights of Travel That Flew with the Stars

To Roads in Unknown Regions

To Days of Childhood

One Must Know the Animals, Verse Folio Page

The Gestures of the Little Flowers, Verse Folio Page

To Parents One Had to Hurt, Verse Folio Page

The Sea Itself, Verse Folio Page

Nights of Travel That Flew with the Stars, Verse Folio Page

Memories of Many Nights of Love, Verse Folio Page

Beside the Dying, Verse Folio Page

Beside the Dead, Verse Folio Page

Your current search criteria is: Artist/Maker is "Ben Shahn".