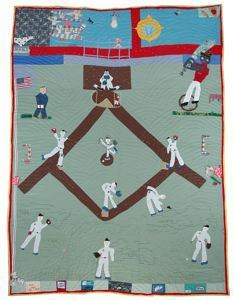 The Great American Pastime: Homage to Jackie Robinson I


The subject of this quilt is the well-known African-American baseball player, Jackie Robinson. One night when Wells was at home listening to her radio, she heard the announcer say that that year, 1997, was the 50th anniversary of Jackie Robinsonâs being accepted into the Big Leagues (that is, Major League Baseball in the United States). His acceptance into an all-white baseball league was a major societal event heralding later American racial integration and the Civil Rights Movement. The quilt features two baseball teams, the Brooklyn Dodgers, for which Robinson played, and their opponents, the all-stars. Jackie Robinson is the largest figure on the quilt in order to emphasize his importance. Each baseball player on the field wears a uniform, and is shown in a different position. Also placed on the quilt are fans located on bleachers, ads representing the baseball sponsors, and hotdogs and apple pie to represent the all-American food usually found at a baseball game. This quilt is typical of Wellsâ other works in that it speaks to a moment in history that she felt needed to be recorded.

Keywords Click a term to view the records with the same keyword
Sports
Ball
Flag
Portfolio List Click a portfolio name to view all the objects in that portfolio
This object is a member of the following portfolios:

Your current search criteria is: Keyword is "YV" and [Object]Nationality is "American".