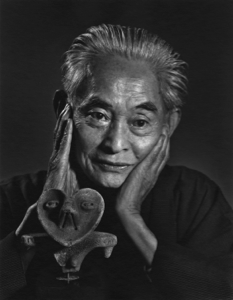 
Yasunari Kawabata (1899â1972) A Japanese novelist and short story writer, Kawabata began writing for the student magazine at Tokyo University and later joined the staff of Bungei Shunju, a literary journal. In 1924 he co-founded the avant-garde journal Bungei Jidai. His writing was influenced by the bereavements he suffered in childhoodâby the age of sixteen he had lost his parents, his only sister, and his grandparents. He was also influenced by traditional Japanese Buddhist literature. His best-known works in the West are Snow Country and Thousand Cranes. In 1968 Kawabata was awarded the Nobel Prize for literature.

Keywords Click a term to view the records with the same keyword
Portraits
Male
Sculpture
Humanities
Portfolio List Click a portfolio name to view all the objects in that portfolio
This object is a member of the following portfolios: