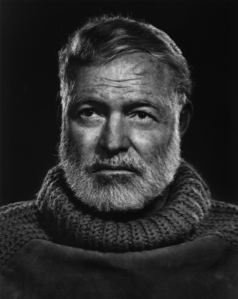 
Ernest Hemingway (1899â1961) Hemingway relied on many of his personal experiences in his novels and stories. His works include The Sun Also Rises, A Farewell to Arms, For Whom the Bell Tolls, and The Old Man and the Sea, which won a Pulitzer Prize in 1953. His fiction usually focuses on people living essential, dangerous lives who meet the pain and difficulty of their existence with stoic courage. Hemingway was awarded the Nobel Prize for Literature in 1954. Despite the macho image that Hemmingway liked to project, Karsh captured the gentle character of the shy writer wrapped in his soft and warm sweater.