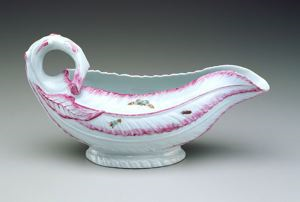 
Dinner tableware was produced by Worcester in smaller amounts than tea and dessert services. Dinner services contained a wide range of pieces, including dishes of various sizes, jugs for water or wine, sauceboats and tureens, and could run as many as 118 pieces.

In the eighteenth century, sauce was offered to conceal the rather bland and often stale taste of certain meats. Sauceboats formed an important part of Worcester's early production, and many variations decorated with diverse patterns were manufactured. This sauceboa is in the form of cos lettuce leaves, the curled stalk forming the handle. The style imitates one from the Meissen factory and came in two sizes. The Meissen originals of the 1740s were sometimes accompanied by ladles, but no Worcester counterpart has been found so far. Sauceboats generally were conceived as pairs with one designed for a right-handed user and one for a left-handed person; the sauceboat in the MMFA collection was designed for a right-handed person. Although lettuce leaf molded sauceboats appear to have been made for a relatively brief period, c. 1755-1758, they are amongst the most common Worcester forms of the 1750s.

The butterflies and bugs painted on the sides of the sauceboat are a motif common to the Indianische Blumen (Indian flowers) style of design borrowed from Meissen. By the late 1750s, Worcester had begun to adapt Meissen designs to their own works, particularly patterns of birds in naturalistic settings and loosely arranged floral bouquets in Meissen's Indianische Blumen style. By the 1760s Meissen inspiration had been fully embraced by Worcester decorators and components of Meissen designs appeared in many Worcester patterns. A high proportion of these sauceboats also are marked with workmen's symbols, a curious departure from normal practice on colored wares of this period. The incised mark on the base of the sauceboat in the MMFA collection is particularly unusual since painter's and workmen's symbols were usually applied in underglaze blue.


Keywords Click a term to view the records with the same keyword
Porcelain
Butterfly
Winged
Leaf
Portfolio List Click a portfolio name to view all the objects in that portfolio
This object is a member of the following portfolios:

Your current search criteria is: Keyword is "W" and [Object]Display Artist is "Worcester Porcelain Factory".