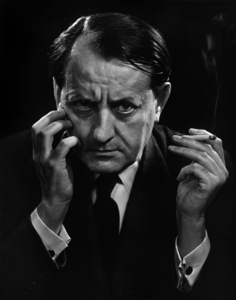 
AndrÃ© Malraux (1901â1976) Malraux was a French author, soldier, and statesman. The anti-Fascist served with Republican forces in the Spanish Civil War, then in the French Army during World War II. He was Franceâs Minister of Information (1945â46 and 1958) and Minister of Cultural Affairs (1959â69). Karsh photographed Malraux as part of a Life magazine commission for portraits of Franceâs intellectual, military, and political leaders. Malraux proved to be one of Karshâs more cooperative sitters, and the artist, ever eager to show his subjects to best advantage, softened the lighting to lessen the impression of Malrauxâs large nose.

Keywords Click a term to view the records with the same keyword
Portraits
Male
Suit
Cigarette
Portfolio List Click a portfolio name to view all the objects in that portfolio
This object is a member of the following portfolios: