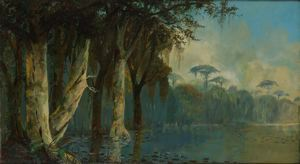 
Joseph Rusling Meeker was a painter active in St. Louis, Missouri, during the mid-nineteenth century. He remains most closely identified with landscape painting, particularly with distinctive images of swamps and bayous of the Mississippi River Delta. As a leading figure within the art world of St. Louis in his era, he served as a teacher, art critic and organizer of artistsâ organizations, including the St. Louis Art Society in 1872 and The St. Louis Sketch Club in 1877.

Meekerâs long-term reputation as an artist was grounded in his experiences during his period of service in the Union Navy during the Civil War. Assigned as a paymaster aboard a Union gunboat of the Mississippi Squadron, he traveled the length of the Mississippi River, sketching the scenery he encountered, including the riverbanks, bayous, swamps and the distinctive flora and fauna that would serve as his chief subject for the remainder of his career. He produced these bayou images for more than twenty years, with his style evolving from a tightly painted and detailed approach reminiscent of the aesthetic of the Hudson River School artists, to more painterly, romantic, and literary-minded evocations designed to convey a mysterious and somber mood.

"Louisiana Bayou" is a painting from the latter part of Meekerâs career, probably dating from the early 1880s. This work exhibits less emphasis on a detailed and factual transcription of nature evident in his earlier works, and a greater emphasis on atmospheric luminosity and iridescent effects in paint application. The best known of the Luminist paintersâMartin Johnson Heade (American, 1819-1904) and John Frederick Kensett (American, 1816-1872), for exampleâwere similarly interested in the use of a glowing, unifying light that modulated the tonalities of a work of art to impart a sense of harmony.


Keywords Click a term to view the records with the same keyword
River
Swamp
Tree
Reflections (Surfaces)
Shoreline
Portfolio List Click a portfolio name to view all the objects in that portfolio
This object is a member of the following portfolios: