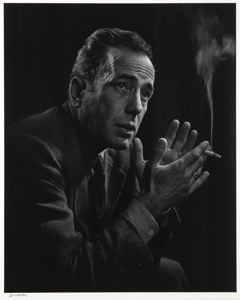 
Humphrey Bogart (1899â1957) Bogartâs most memorable films are The African Queen (1951), The Maltese Falcon (1941), and Casablanca (1942). He is famous for portrayals of heroes with good hearts behind tough, cynical exteriors. In this portrait Bogart looks like the tender but troubled heroes he played. During his life Bogart was one of the most respected figures in American cinema but his reputation grew after his death. In 1997, Entertainment Weekly magazine ranked him the top movie legend of all time and in 1999 the American Film Institute called him the greatest male star of all time.

Keywords Click a term to view the records with the same keyword
Portraits
Male
Ring
Suit
Cigarette
Portfolio List Click a portfolio name to view all the objects in that portfolio
This object is a member of the following portfolios: