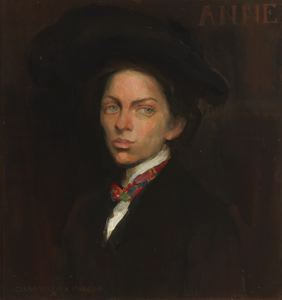 
The sitter, Anne Goldthwaite (American, 1869-1944) was a fellow Alabama artist who lived in New York during various periods of Parrishâs career. Goldthwaite studied at the Academy of Design in New York between 1898 and 1906 and, given her age in this portrait, possibly sat for Parrish there in New York. It is unknown if she studied with the artist, or if they were previously acquainted in Alabama. Goldthwaite traveled to Paris to study in 1906. After her return from Europe in 1913, she spent most of the remainder of her life in New York, with summer visits to her family in Montgomery. The Museum owns over five hundred of her works, including "Well with Red Rooster" (n.d.) (1971.1) and "Yellow Calla Lilies" (n.d.) (1972.84).

Keywords Click a term to view the records with the same keyword
Portraits
Female
Busts
Hat
Scarf
Suit
Portfolio List Click a portfolio name to view all the objects in that portfolio
This object is a member of the following portfolios: