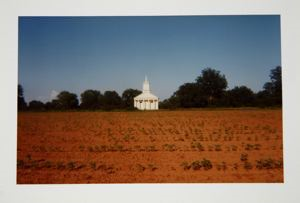 
William Christenberry was born 5 November 1936 in Tuscaloosa, Alabama. He attended the University of Alabama where he obtained BFA and MA degrees. He was appointed an Instructor of Art at his alma mater in 1959 and taught until 1961, when he accepted a position to teach at Memphis State University and became Assistant and then Associate Professor of Art. He moved to Washington, D.C. in 1968, where he served as Associate and then Professor of Art at the Corcoran School of Art from 1968 until 2006. He still resides in Washington, D.C., with his wife Sandy. Growing up in Hale County, Christenberry developed a fascination with the landscape of Alabama and its vernacular architecture. Though he has since firmly established himself in Washington, D.C., he maintains that Alabama is âwhere my heart is.â The sun, earth, and architecture of Alabama are what he appreciates. He said that he âempathize[s] with pure landscape.â On annual visits by car to his relatives, he responds to the Alabama landscape âyear after year.â He has no affinity for prefab architecture or antebellum Southern mansions, but instead has long gravitated towards Alabamaâs old country stores and aging or abandoned tenant buildings âthe âbeauty of a given structure.â He stated âthe things that have agedâthat appealed to me more.â In his paintings, drawings, sculpture, and photographs, he tries to capture images of those vernacular buildings of Alabama that are increasingly collapsing and disappearing. âAll of my workâwhether painting, sculpture, or photographyâdeals with my affection for the place I am from, Alabama.â

Like his affection for old country stores and Alabama soil, Christenberry also appreciates Alabamaâs country churches and he has expressed his dismay at their gradual abandonment: âUnfortunately, the churches, the wonderful country churches, are disappearing, being replaced by cinderblock churches.â * This photograph is one his efforts to record these vanishing buildings.

Keywords Click a term to view the records with the same keyword
Cotton
Fields
Church
Farming
Sunny
Soil
Portfolio List Click a portfolio name to view all the objects in that portfolio
This object is a member of the following portfolios:

Your current search criteria is: Keyword is "LY" and [Object]Object Type is "Photograph".