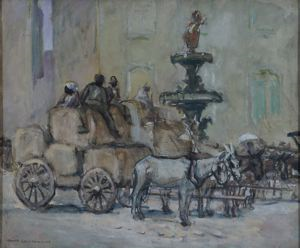 
This composition by Anne Goldthwaite depicts an event that was common in Montgomery into the early twentieth century, but had its roots in the nineteenth. The fountain in the background, locally known as Court Square Fountain, was installed in 1885 on the site of an artesian well. The street running north from the square, Commerce Street, was lined with warehouses for the storage of cotton brought from the surrounding countryside and auctioned, intended for eventual shipment down the Alabama River to the port of Mobile. The mule-drawn wagons Goldthwaite has painted were for many years the most practical form of transport in rural areas where roads were unpaved, and became impassable to motorized vehicles in wet weather.

Keywords Click a term to view the records with the same keyword
Cityscapes
Figure Groups
Cotton
Wagon
Farming
Mule
Fountain
Summer
Portfolio List Click a portfolio name to view all the objects in that portfolio
This object is a member of the following portfolios:

Your current search criteria is: Keyword is "I" and [Object]Object Type is "Painting".