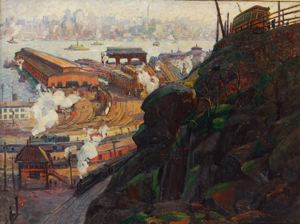 View of Manhattan from the Terminal Yards, Weehawken, New Jersey


"View of Manhattan from the Terminal Yards, Weehawken, New Jersey" was painted from the top of the Palisades at about Forty-ninth Street in Weehawken, overlooking the Hudson River. This is the terminal yard of the West Shore Railroad division of the New York Central Railroad, with its maze of tracks, trains, switching stations, and tiny figures at work. Beyond is the waterfront of the Hudson, small tugboats and ferryboats plying its surface, and in the background, the expansive skyline of midtown Manhattan rises from the distant shore. The artist differentiated the close foreground view of the embankment from the middle and background planes. The rocks are painted in cool, dark, rich colors, with large, broad strokes that create angular, solid shapes. The frieze of buildings in the background, by contrast, seems to sparkle in the light, enlivened by the small, short brushstrokes typical of Impressionism. While many of his contemporaries depicted the urban landscape as a grim and dehumanizing environment, Kroll portrayed New York as a beautiful, soaring mass of architecture on the horizon, mysteriously veiled in the steam and haze created by the trains and the river. Painted predominantly in tones of orange, green, and cream, the railway yard appears to be a place of excitement and energy, with engines and people on the move. Such paintings spoke to the prosperity of America at the time, and the basic optimism that prevailed in light of burgeoning commercial and manufacturing economies.

American Paintings from the Montgomery Museum of Fine Arts, cat. no. 67, p. 166.

Keywords Click a term to view the records with the same keyword
Cityscapes
Rock
Urban Life
Industrial
Buildings
River
Trains
Tracks
Portfolio List Click a portfolio name to view all the objects in that portfolio
This object is a member of the following portfolios:

Your current search criteria is: Keyword is "I" and [Object]Object Type is "Painting".