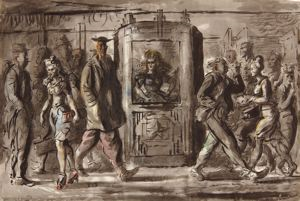 
Credit Line: Gift of the Estate of Felicia Meyer Marsh


Motion pictures became a primary form of entertainment for the urban population in the 1930s. Particularly for Reginald Marshâs lower- and working-class subjects, the movies provided a psychological respite from the poverty of the Depression and, later, gave general access to the glamorous life of the wealthy and famous. The frieze of figures arrayed along the sidewalk in "Movie on 42nd Street " demonstrates the strength of Marshâs drawing ability and his skill as a recorder of urban types. Numerous characters appear on his stageâthe harried businessman, the shop girl on her way to work, and the busty blonde ticket taker, who as much as the movie, seems to be on display as an attraction for passersby. Marshâs brisk drawing style matches the stride of his figures as they cross the pictorial stage, merging with the endless flow of humanity in the metropolis.

American Paintings from the Montgomery Museum of Fine Arts, cat. no. 76, p. 184.

Keywords Click a term to view the records with the same keyword
Cityscapes
Figure Groups
Urban Life
Street
Theatrical
Window
Theatre
Box Office
Portfolio List Click a portfolio name to view all the objects in that portfolio
This object is a member of the following portfolios:

Your current search criteria is: Keyword is "I" and [Object]Object Type is "Drawing".