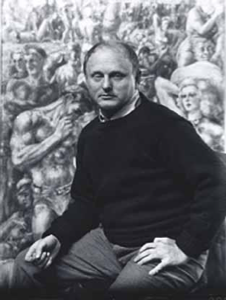 Reginald Marsh was born in Paris on March 14, 1898 to Fred Dana Marsh and Alice Randall Marsh. Both his parents were American citizens and artists; his father was a muralist and his mother painted miniature watercolors. Fred Marsh's family was wealthy and Marsh was raised in an upper class setting where he was constantly exposed to art. The Marshes returned to the United States in 1900, when Reginald was two, and settled in New Jersey. Marsh drew constantly during his childhood and was encouraged by his mother to draw from life, though his father did not encourage his interest in art. The family moved to New Rochelle, New York in 1914 and Marsh was sent to Lawrenceville School, a military academy, in 1915 where he did drawings for the school yearbook. After graduation from Lawrenceville, Marsh proceeded to Yale which he attended from 1916 to 1920. He became involved with The Yale Record, the university's humor magazine, as illustrator and art editor, but didn't enter the Yale Art School until his senior year. While at Yale, the prototype of the "Marsh girl" first appeared in his work. This highly attractive, usually voluptuous, and generally unapproachable female type became a hallmark of Marsh's work.

After graduation, Marsh moved to New York City and began to work as a freelance illustrator for a variety of newspapers and magazines including Esquire, Vanity Fair, Harper's Bazaar , and the New York Daily News, a practice he continued throughout his career as a painter. He also served as one of the original members of the New Yorker's staff. Marsh began to study painting under John Sloan (and occasionally George Luks) at the Art Students League, though his attendance was erratic and he stayed only a short time. His work was beginning to be noticed, however, and the early 1920s proved busy for him. In 1922 and 1923, he was hired to design curtains and stage sets for productions of the Greenwich Village Follies. In 1924, he had his first one-man exhibition of watercolors and oils at the Whitney Studio Club. In 1923, he also met and married the sculptor, Betty Burroughs, whose father, Bryson Burroughs, was curator of painting at the Metropolitan Museum of Art as well as a painter in his own right. Marsh's new relatives included the art critic, Alan Burroughs, and the painter, Molly Luce.

Marsh and his wife Betty lived with the Burroughs in Flushing, New York until their divorce in 1933 and the family served as a constant inspiration to Marsh to continue his painting. In 1925, Marsh traveled to Europe spending much of his time in Paris at the Louvre copying paintings by Old Masters such as Rubens, Titian, and Rembrandt, a habit he continued at other museums after he returned to New York. Between 1928 and 1953, he made six more trips to Europe to visit, study, and sketch major collections. From 1927 through 1928 Marsh also resumed classes at the Art Students League, this time under the instruction of Kenneth Hayes Miller who became a close friend as well as mentor. It is Miller who urged Marsh to paint contemporary urban subjects. Marsh himself eventually became an instructor at the Art Students League in 1935. Also during this period Marsh married his second wife Felicia Meyer in January of 1934.

When he began painting, Marsh experimented with a variety of pigment binders before being introduced to egg tempera by Thomas Hart Benton in late 1929. Egg tempera provided the kind of translucency and rich color to his oils that Marsh had been searching for and he continued to use it for the next twelve years. In 1935, under the auspices of the New Deal program, Marsh tried his hand at fresco painting, providing two frescoes for the Post Office Department building in Washington. In 1937, he painted another fresco mural program in the rotunda of the Cass Gilbert's Custom House in New York under commission from the Treasury Relief Art Project.

Marsh returned to easel painting in 1938 and began, once again, to experiment with different binders. He had become dissatisfied with egg tempera and, in 1939, he returned to watercolor, using it almost exclusively for a year. In 1940, however, he was introduced to a new oil medium created by Jacque Maroger, former technical director at the Louvre, which was reputed to recreate the translucency and deep, rich color of Flemish painting. Marsh worked with Maroger medium from 1940 to 1946 but was never entirely satisfied with the results. Marsh's style also began to change during this period. His works became less crowded, had fewer details, and simpler settings.

In addition to his experiments with painting media, the period from the late 1930s through the 1950s saw Marsh experimenting with other technical aspects of his art, most notably different forms of printmaking. Marsh became interested in monochromatic printmaking in the late 1930s, and in engraving around 1937, taking lessons from the British engraver, Stanley William Hayter. During the 1940s, Marsh experimented with lithography and in 1943 he began to do large monochromatic drawings in Chinese ink.

In 1949, Marsh was appointed chairman of the painting department at the Moore Institute of Art, Science, and Industry in Philadelphia. He continued to teach at the Art Students League and to produce innumerable sketches, prints, and paintings. His book, Anatomy for Artists, (reflecting his lifelong study of anatomy and dissection), was published in 1945. In the early 1950s he was appointed art editor of the Encyclopedia Britannica and awarded the gold medal of the National Institute of Arts and Letters. He died in 1954 leaving an enormous oeuvre consisting of scrapbooks, notebooks, photographs, and calendars, nearly one thousand paintings, over two hundred prints, and hundreds of drawings and watercolors.

Despite the amount of technical experimentation in his work, new subjects were rare in Marsh's art. He tended to repeat the same urban themes and sometimes the same compositions, though with alterations and improvements, or changes in media. Marsh's preferred subject was the New York of the 1930s and 1940s. He loved crowds and preferred to paint the raw, uncouth, and often seedy parts of New York: the Bowery, Coney Island, the burlesque theaters, subways, and amusement parks. Marsh's choice of subject aligned him with the urban realist tradition of the Ashcan School and painters such as his teachers, John Sloan and George Luks. Like Marsh, they preferred to paint the streets of New York and did not hesitate to paint the ugly as well as the polished sides, the dirt as well as the glitter. Some commentators have considered Marsh a more objective realist than his predecessors, arguing that he simply reported without comment the scenes that he depicted. It is arguable in many instances, however, that there are strong elements of irony, caricature, and satire present in many works, particularly when the subject was high society.

Three motifs tend to dominate Marsh's works. The first is an obsession with accurate detail, a preoccupation graphically revealed in the numerous photographs, sketches, and other studies of the sites and scenes he depicted. Though the emphasis on detail diminished in Marsh's later works, particularly after the middle 1940s, the objects he chose to depict were always carefully studied beforehand.

A second motif is the importance of the human, particularly female, body. Though Marsh was interested in the human figure, and the idea of people on display, he was not particularly interested in individuals and when he focused on them they tended to be cast as types (the blond bombshell, the muscleman), particularly in his later works. As well, the people in his crowds often seem isolated from each other even when physically crowded together. Marsh's studies of anatomy, as well as the art of the Old Masters, are additional examples of his fascination with the human torso. The clothes on many of his figures so closely model the muscles beneath that at first glance they appear nude. This close modeling may be partially responsible for the third dominant motif in Marsh's art, that is the strong sexual charge present in many of his works. His depictions of women, in particular, reflect the pinup girl and movie star posters of the '30s and '40s where flesh is abundantly on display, though generally unreachable. Others have noted the contrast between his active, vital, confident young women and the crippled or passive and inattentive men that surround them in many works.

Reflecting perhaps his beginnings as an illustrator, Marsh's style is characterized by an active line which gives a palpable sense of movement and vitality to many of his works, a vitality that almost seems ready to burst from the picture plane in some instances. Further enhancing this sense of energy and movement is the shallow spatial recession and lack of a single focal point in many works which keeps the viewer's eye in continual motion across the front of the picture plane.

Your current search criteria is: Artist/Maker is "Reginald Marsh".