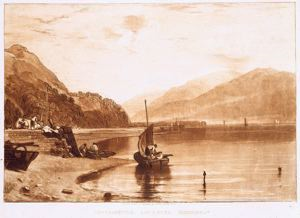 Medium and Support: Etching and mezzotint on paper
Accession Number: 1994.0004


Turner was trained as a topographical artist, and worked with professional engravers from the beginning of his career. A significant portion of his work was executed with the intention that it would be reproduced in a graphic medium such as engraving, etching, aquatint or mezzotint. While his greatest interest in mezzotint dates from the 1820s, he created an earlier group as part of his manual known as âLiber Studiorumâ (1807-1819) intended as a teaching aid for students to convey Turnerâs ideas regarding light and composition. "Inverary Pier, Loch Fyne. Morning." was issued in Part VII of the "Liber Studiorum" published in June of 1811. Inverary is located on the western side of Loch Fyne in Scotland. This composition is one of only ten in the manual that was conceived and etched by the artist himself; the remainder were produced by professional printers under his supervision.

Keywords Click a term to view the records with the same keyword
Landscapes
Seascapes
Cityscapes
Water
Boat
Sail Boat
Portfolio List Click a portfolio name to view all the objects in that portfolio
This object is a member of the following portfolios: