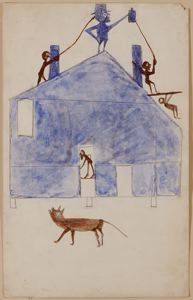 Medium and Support: Watercolor and graphite on cardboard
Accession Number: 1982.0004.0029


A straight edge, pencils, poster paints, and cast-off paper or cardboard constitute the rudiments of Traylorâs art. He began by drawing geometric shapes (such as the rectangles and triangles visible in House), and then filled in the outlines with pencil or paints. The cardboard ground usually absorbed the paint, preserving the free-spirited strokes with which it was applied and creating subtle variations in color.

Compositions such as this one can be colloquially referred to as âchicken stealing mayhem,â and Traylor painted such scenes frequently. Here, the figures literally swing from the rafters and shout from the rooftop, while a baying dog in the foreground provides further commentary. The reason for the excitement is unmistakable, and is seen in the hand of the figure balanced precariously on the roof. Known euphemistically as âthe bottle,â alcohol accounts for the activity below.

American Paintings from the Montgomery Museum of Fine Arts, 2006, cat. no. 34

Keywords Click a term to view the records with the same keyword
Animals
Dogs
Figure Groups-Men
House
Alchoholic Beverages
Window
Portfolio List Click a portfolio name to view all the objects in that portfolio
This object is a member of the following portfolios:

Your current search criteria is: Keyword is "B" and [Object]Object Type is "Drawing".