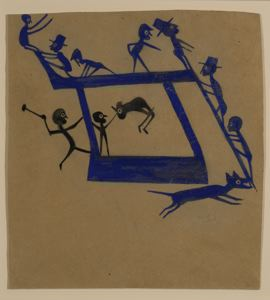 Medium and Support: Watercolor and graphite on cardboard
Accession Number: 1982.0004.0016


Bill Traylor's typical subjects were drawings of figures, animals, and works such as this one described as "constructions." In the "constructions" there are frequently narrative implicationsâhere small figures scurry up and over an architectural form; three figures are engaged in a violent altercation on the lower left. On the right, a barking dog chases other figures up a ladder to a second level; across the top of the structure two figures appear ready to push a third off the opposite side.

The actual narrative in this case and in similar works is unknown; it is believed that Traylor may have based such compositions on memories of his past life in rural Alabama. The events and actions, however, are somewhat generic from drawing to drawing, with various forms of raucous behavior as the norm.

Keywords Click a term to view the records with the same keyword
Dogs
Figure Groups-Men
Buildings
Fighting
Club
Portfolio List Click a portfolio name to view all the objects in that portfolio
This object is a member of the following portfolios:

Your current search criteria is: Keyword is "B" and [Object]Object Type is "Drawing" and [Object]Display Artist is "Bill Traylor".