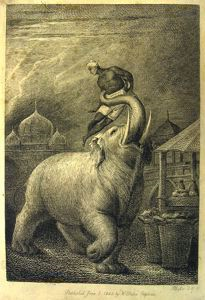 1802
From the book, Ballads, by William Hayley


This engraving is the frontispiece to âBallad the First,â that faces page one of "Designs to a Series of Ballads," issued in four parts with a total of fourteen engravings from Blakeâs own designs. Simultaneously, in 1802, Blake produced an illustrated biography of the poet William Cowper (English, 1831â1800) also by Hayley. Hayleyâs "Ballads Founded on Anecdotes Relating to Animals with Prints, Designed and Engraved by William Blake" was published three years later with a total of sixteen ballads. Hayley had his friends distribute copies of the "Ballads and Blake himself issued some in individual parts.

Initially, Blake and Hayley proposed to issue one number each month with three illustrations per balladâa frontispiece, a headpiece, and a tailpieceâfor fifteen months and a total of forty-five engravings; however, Blake issued only fourteen plates and complete collections of those are extremely rare. The publication is well documented by Hayleyâs correspondence, but the series made no impact in London and Blake surely lost money on the venture because he appears to have covered most of the costs of publication.

The Elephant (Headpiece)
1991.0012.0010
Portfolio List Click a portfolio name to view all the objects in that portfolio
This object is a member of the following portfolios:

Your current search criteria is: Object is "The Elephant (Frontispiece)".