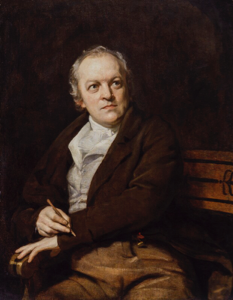 Blake began his career as a reproductive engraver. He was born November 28, 1757 to a hosier, James Blake, and his wife Catherine. He was the second in a family of five children. Blake attended drawing school as a child and was apprenticed to an engraver in copper, James Basire, for 50 guineas on August 4, 1772.(1) After about seven years training, he left his apprenticeship in 1779 and continued his study by working at the School of the Royal Academy. He took assignments as a book illustrator and in 1784 attempted to form a partnership with a fellow former apprentice, James Parker. Although the business failed, he continued his work as a painter and an engraver, eventually making illuminated books that incorporated his writings as well as his illustrations.

By 1788, Blake had invented a process for engraving which combined text and design on a single plate that he engraved himself. He used a method in which text and decoration stood out on the plate in relief as stereotype, the whites of the print being etched instead of the darks.(2) The exact technique is not fully understood but the printed areas were put on the plate with an acid resistant material so that when the plate was bitten in acid a relief resulted. How Blake conceived of the process is unknown, however one of Blake's brothers, Robert, came to live with Blake and his wife, studying as Blake's pupil until he fell ill and died at the age of 19. Blake was greatly affected by his brother's untimely death and he attributed much of his inspiration as an artist to his communication with his dead brother. Supposedly this process was inspired by his dream of seeing Robert's spirit. (3)

By the time Blake produced the engravings to the Book of Job, he had already made and sold a number of illustrated books and treatises. He used personal symbols, combined with Christian iconography, to communicate a mystical philosophy based on his own visions. His illuminated texts included Songs of Innocence (1789), The Four Zoas (1804) and Milton and Jerusalem (ca. 1820). Blake's professional training as an engraver and artist was spurred by the influence of earlier printmakers, particularly Germans such as Albrecht DÃ¼rer, Bartel Beham (a Little Master), the Dutch engraver Maerten Heemskerck, as well as Italians Marc Antonio Raimondi, Giulio Bonasone and Adam Ghisi. Blake is known to have collected prints himself.(4)

1 Geoffrey Keynes, William Blake: Poet, Printer, Prophet, New York: The Orion Press, 1964, p. 11.
2 David Bindman, William Blake's Illustrations of the Book of Job. The William Blake Trust, London, 1987, p. 12.
3 Keynes, p. 14. Blake's friend George Cumberland, an insurance agent who was an amateur artist, noted in a letter in 1784 that he could print text from copper plates. Blake had helped Cumberland to print plates of Cumberland's design and thus the development of the stereotype process might have been collaborative or at least inspired by Cumberland's experiments.
4 Archibald Russell, The Engravings of William Blake, New York: Benjamin Blom, 1968, p. 19-20.

The Hiding of Moses

Your current search criteria is: Artist/Maker is "William Blake".