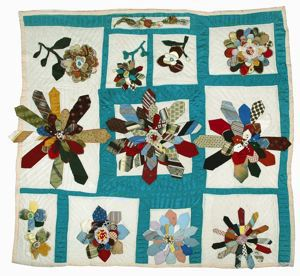 
With each new Necktie Flower Garden quilt, Nora Ezell took the opportunity to change some elements of the composition, either the size of the flower patterns, the colors and patterns of the ties, their placement within the confines of the quilt, or the borders that surround them.

The MMFAâs quilt, Noraâs Necktie Flower Garden (no. 5), completed in 1994, is similar to the previous version, Noraâs Necktie Flower Garden #4 (1994) however, Ezell has eliminated the âpathsâ in favor of elongating the petals of the three, centrally placed flowers. The surrounding white blocks have smaller appliquÃ©d flowers that differ in pattern, shape, and construction technique, and she has included a small flowering vine at the top-most portion of the quilt.

Your current search criteria is: Portfolio is "Classification: Textile" and [Object]Display Artist is "Nora Ezell".