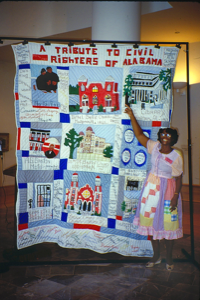 Nora Ezell (1919-2007) (1) was a quilter active in Alabama during the late twentieth and early twenty-first centuries. She was one of a number of Alabama quilters to receive recognition within her state through the nomination for and receipt of the Alabama Folk Heritage Award in 1990, but who also received national recognition for her quilts through The National Heritage Fellowship given by the National Endowment for the Arts in 1992.(2)

Nora Ezell was born in Brooksville, Mississippi on June 24, 1919 to James and Laura Daley McKeown. Her parents relocated Nora and her nine siblings to Birmingham, Alabama, where her steelworker father had secured a job, when she was between five and six years old. It was while in school in Birmingham that Nora was taught to sew by hand and on a machine by her Home Economics teacher. She added this knowledge to her early memories of her mother and aunt quilting. In time, she was allowed to piece simple swatches together. She even learned the basics of recycling plentiful readily available materials such as feed bags for use in quilt making. Eventually, these rudimentary lessons and practical skills gave way to full pieced quilt tops and then to narrative, or âstoryâ quilts.(3)

Nora Ezellâs marriage in 1936, the subsequent birth of her daughter in 1937, and the variety of sewing(4) and factory jobs she held through the years, may explain her sporadic output of quilts in the years between childhood and her later life.(5) Her first quilts were made up of stitched pieces of heavy upholstery material, often with neutral toned accent fabric and blue borders. The traditional patchwork structure recalled those simple patterns she learned from watching her oldest sister, although she prided herself on adding her own unique touch to even borrowed designs by varying the fabrics.(6) In her book My Quilts and Me, Ms. Ezell refers to these early efforts as âquilts made before I learned how to quiltâ.(7)

Nora Ezellâs quilting skill transcended simple patchwork quilts, and in the early 1980s, after visiting a fair with her daughter Annie Ruth, she embarked on what would become her first story quilt. Ezell recounts, ââ¦after looking at someoneâs version of the Alabama quilt, we decided âBear Bryantâ made history at the university, but not all of it. Several people played a part, so I came up with my idea of making my University of Alabama (1984)(8) quilt.â¦â.(9)

Her next story quilt, the topic of which was suggested by her daughter who, tragically, died before its completion, featured important moments from the life of the Reverend Dr. Martin Luther King Jr. . That quilt led to her first story quilt commission by the Civil Rights Institute in Birmingham.(10) A Tribute to the Civil Righters of Alabama, 1954-1989, (1989) features scenes from the tumultuous struggle for civil rights, highlighting important places -such as the 16th Street Baptist Church, events- such as the founding of the Southern Christian Leadership Conference by Rev. Dr. King, Rev. Abernathy, and Rev. Shuttlesworth, and includes embroidery on the border of each block that pertains to the events or spirit of the time- such as the lyrics for the protest song âWe Shall Overcomeâ. Since this quilt was a commission, Nora Ezell kept a detailed diary of her thoughts and emotions and physical difficulties while she was completing each of the nine panels, as well as time log listing the hours that she worked on the quilt. This final tally was designed to help her calculate the monetary cost of each quilt, although she never charged for the hours worked on Sunday. (11)

After the completion of the A Tribute to the Civil Righters of Alabama, 1954-1989 (1989) quilt, Nora Ezell accepted two major awards for Folk Art: The 1990 Alabama Folk Heritage Award and The 1992 National Heritage Fellowship.(12) She also received several more commissions for story quilts, including The Bible Story Quilt, Stories from the Old and New Testaments (1990), Beautiful Birmingham (1991), Kentucky Derby (1991), Music is the Universal Language (1992), and Baseball (1993). Each of these quilts was delivered with an hour log, and all but Music is the Universal Language was also accompanied by Nora Ezellâs diary entries for the period each quilt was being constructed.(13)
Nora Ezell was known for her feisty character, her needlework, and sewing skills. She continued to quilt into her 80s and won state and national awards for her contributions to the preservation of folk art. She lived through the struggles of the Civil Rights movement to see its success, outlived her only child and her husband, went on to help raise several grandchildren, and wrote and published her thoughts on her art. She saw her work exhibited and acquired by several art museums, including the American Folk Art Museum and the International Quilt Study Center.(14) She died in Tuscaloosa, Alabama of a stroke on September 6, 2007 at the home of one of her granddaughters.(15)

Your current search criteria is: Artist/Maker is "Nora Ezell".