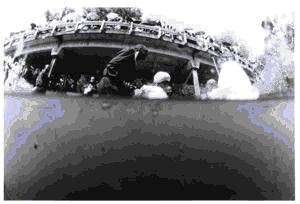 
Caroline Davis chose to make traditional African-American baptisms the focus of her fine arts work in the 1990s. She was born in Tuscaloosa, Alabama, and feels the ceremonies of the Baptist church are an important part of her Southern heritage. The artist has great respect for the people she photographs and for the ritual, which culminates in the total immersion of the initiate at the hands of the minister and church elders. Before the religious rites, which occur only two or three times each year in African-American churches in the Black Belt, she obtains permission to photograph from church leaders, and later supplies the congregation with images.

She shoots with a camera which functions underwater so that, as here, she can capture both the moments when a person is immersed as well as the dramatic interplay of light and splashing water at the surface, often positioning the camera to record action above and under water simultaneously. In "Beneath the Bridge," she frames the foreground action with the bridge lined with church members and other spectators, many of whom hold umbrellas to shade themselves from the hot summer sun. This view reveals the popularity of such rural events and emphasizes the communal aspect of the tradition rather than the emotional intensity felt by individual initiates.

Keywords Click a term to view the records with the same keyword
Figure Groups
Child
River
Ceremony
Bridge
Reflections (Surfaces)
Umbrella
Religious
Portfolio List Click a portfolio name to view all the objects in that portfolio
This object is a member of the following portfolios:

Your current search criteria is: Portfolio is "Classification: Photograph" and [Object]Display Artist is "Caroline Davis".