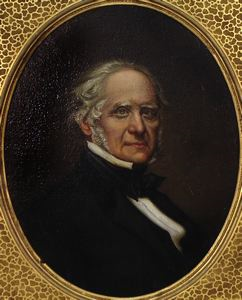 
The bust-length portrait of George Peabody (1795-1869) is true to Elliottâs mature style. The distinguished subject is shown in coat and tie with his head turned slightly to his right, his bright blue eyes framed by his bushy eyebrows and shaggy hair. Comparison with photographs at the National Portrait Gallery by Mathew Brady (NPG.76.87), A. Adolphe-Eugene Disderi (NPG.95.371), and an unidentified photographer (NPG.79.54) suggest that the painting was made about 1860, during the last decade of the lives of the artist and his subject.

George Peabody was born in poverty in South Danvers (now Peabody), Massachusetts in 1795. With only a rudimentary education, he worked his way to a senior partnership in a wholesale dry goods firm by 1829. He became an incorporator and president of the Eastern Railroad in 1836 and moved to London the next year as head of George Peabody and Company, which raised capital in England for American enterprises. He also encouraged Anglo-American relations with his philanthropy, which was immense. He established the Peabody Museums at Yale and Harvard, and he gave generously to alleviate the conditions of the poor in London, where he died in 1869. After a funeral in Westminster Abbey, he was buried in the town of his birth.

Keywords Click a term to view the records with the same keyword
Portraits
Male
Oval
Portfolio List Click a portfolio name to view all the objects in that portfolio
This object is a member of the following portfolios: