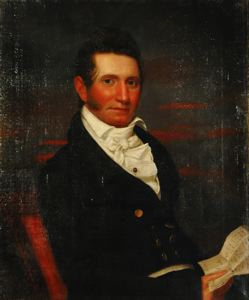 
The subject of this painting probably is Joseph H. Hawkins, a Kentucky state legislator from 1810 to 1813 and a US congressman from 1813 to 1815. The jeweled shirt stud, shinny buttons, ruffles, and tie distinguish Mr. Hawkins as a prosperous, dapper dresser. The sweeping contour of the coat lapel against the sky (although not totally realistic) echoes the silhouette of the handsome head. The upswept hair and highlighted forehead draw attention to the mind of this man. The only weakness is in the drawing of the right hand, most of which the artist hid behind the letter.

Metcalf must have portrayed Hawkins in New Orleans between the autumn of 1819 and the autumn of 1822. The rosy tones in the sky may symbolize the bright economic prospects to the west of Louisiana or the sunrise on Texas, then still a part of Mexico. Considering the outcome of Hawkinsâ investments, the paper he holds may represent the worthless promissory note of an impecunious Texas settler. In 1819 he moved to New Orleans where he was an attorney and businessman. In 1821 he met Stephen Austin, the Father of Anglo-American Texas, whose Texas colonization efforts he supported financially. It is estimated from his notes and papers that he spent about $30,000 to colonize Texas. He died bankrupt in the fall of 1823.

Additional Images Click an image to view a larger version