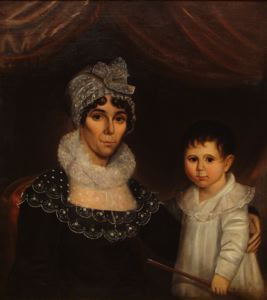 Portrait of a Woman and Child


An artist whose identity remains unknown painted this early portrait of a mother and her young son. Today the artist would be classified as a traditional folk painter, an artist who was not formally trained. Judging from the womanâs attireâthe high-waisted dress and elaborate lace collar and bonnetâand her hairstyle, the portrait probably dates to the 1820s or 1830s. At that time, little boys wore gowns or dresses, like the one depicted here, until they received their breeches between age four and six. The toy gun held by the child is a clear indication that he is male. As was typical of the style, the folk painter lavished considerable attention on the fine details of clothing and hairstyle, but the drapery and facial features are less expertly rendered.

Keywords Click a term to view the records with the same keyword
Portraits
Female
Mother
Child
Fashion
Formal dress
Firearms
Portfolio List Click a portfolio name to view all the objects in that portfolio
This object is a member of the following portfolios:

Your current search criteria is: Portfolio is "Classification: Painting" and [Object]Century is "Nineteenth Century" and [Object]Display Artist is "Anonymous Artist, American".