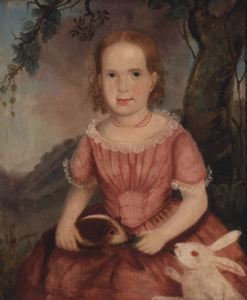 
James Henry Beard was a native of New York but painted portraits in both the Midwest and South in the early nineteenth century. Portrait of a Girl with Pets probably dates from early in Beardâs career in the 1830s, during which he was noted for his portraits of children and small animals. The young girl sits in a fanciful landscape with a guinea pig on her lap and a pink-eyed white rabbit at her left knee. Both pets feed on a single sprig of greenery that the girl holds in her left hand. Her strawberry-blond hair hangs in curls, which were popular during the decades prior to the Civil War. From the colonial era, the depiction of children with animals, primarily pets, was a common practice. The inclusion of pets with a child served to distinguish the child as a distinct individual and also served as a link to the natural world.

Keywords Click a term to view the records with the same keyword
Portraits
Female
Gardenscape
Child
Rabbit
Fashion
Pet
Coral beads
Portfolio List Click a portfolio name to view all the objects in that portfolio
This object is a member of the following portfolios:

Your current search criteria is: Related to "James Henry Beard".