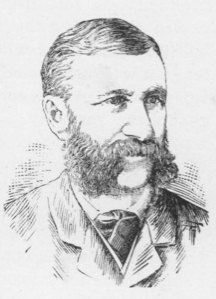 James Henry Beard was born May 20, 1811 or 1812 in Buffalo, New York to Captain James and Harriet (Woolcott) Beard. (1) In 1823 he moved with his family to a farm outside Painesville, Ohio where his younger brother William Holbrook Beard (1824-1900)âanother notable painterâwas born. James learned to paint from an itinerant limner. Beard was active as an itinerant portraitist in the Midwest as early as age 17. He charged $5 per head and $15 for a portrait with a hand holding a book. (2) In 1830 he settled in Cincinnati, where he married Mary Caroline Carter in 1833. He continued to travel to Pittsburgh, Louisville, Lexington, and New Orleans, wintering in New Orleans between 1834 and 1870. In 1846-47 he visited New York City, where he helped to found the Century Club. During the Civil War he served as a captain on the staff of Union General Lew Wallace. In 1870 he joined his brother William in New York City. James was an honorary member of the National Academy 1846-60 and a full member from 1872. During his later years he relinquished portrait painting almost entirely and devoted his attention to painting animals. (3) He died April 4, 1893 in Flushing, NY.

Your current search criteria is: Artist/Maker is "James Henry Beard".