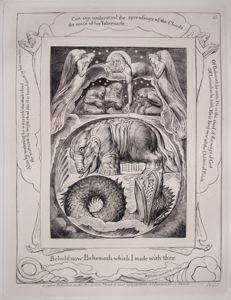 
The story of Job, as seen by William Blake, was a simple tale of a man whose faithfulness is tested and, by virtue of the testing, finds his spiritual destiny. Blake identified closely with the figure of Job, and also identified Job with the figure of God the father in his illustrations to the "Book of Job." His own career was a series of triumphs and missteps; his fortunes rose and fell regularly over the course of his life. and he may have identified strongly with the Job's story as a man who fought his way to spiritual enlightenment through trials and tribulations, coming to peace and acceptance in his old age. Blake was both a poet and a visual artist and he interpreted texts within the larger cosmology of the spiritual world. This plate features two mighty beasts, the Behemoth and Leviathan, the first associated with the land, and the second with the sea. These fantastic creatures are also associated with the destructive forces of nature and natural disasters such as hurricanes or earthquakes.

1973.0015
Portfolio List Click a portfolio name to view all the objects in that portfolio
This object is a member of the following portfolios:

Your current search criteria is: Object is "Behold now Behemoth which I made with thee".