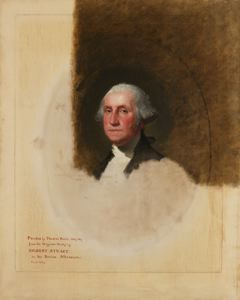 
Gilbert Stuart painted his famous Athenaeum portrait of George Washington from life in Germantown, Pennsylvania, in 1796. It was an immediately influential image, both artistically and politically, and Stuart (or his studio assistants) received commissions from private individuals and governmental agencies to make some seventy copies of it.

Thomas Hicks, a popular portraitist of the mid-nineteenth century, painted this copy some seventy years later, emulating the unfinished character that contributes to the workâs sense of immediacy and spontaneity. Hicks made several copies, but his reasons for making them are unknown. He may simply have responded to a ready market that continued to thrive because of the social, political and historical importance of the nation's first president.


Keywords Click a term to view the records with the same keyword
Figure
Historical
Political
Male
Busts
Legendary
Oval
Aged
United States Government
Portfolio List Click a portfolio name to view all the objects in that portfolio
This object is a member of the following portfolios:

Your current search criteria is: Object is "George Washington".