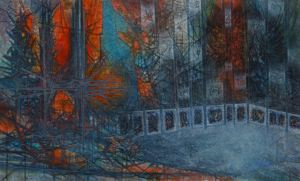 
In 1961 Ernst went to the Soviet Union as a visiting specialist in the U.S. State Departmentâs cultural exchange program. While there, he saw the grave of the author and poet Boris Pasternak, who had died the year before. This experience prompted Ernst to paint several memorials to Pasternak, including "Voices of Silence". Like Ernst, Pasternak had grown up in the cultured and literary environment of a Jewish family. His 1956 novel Doctor Zhivago was banned in the U.S.S.R. because of its realistic treatment of life during the revolutionary era. When he was nominated for a Nobel Prize, Pasternak was ejected from the writerâs union and deprived of official recognition. Although never expelled, he was denied his livelihood and condemned by the Soviet state. Doctor Zhivago was not released in Russia until 1987, twenty-seven years after the authorâs death. Ernstâs composition implies a vacant space, shattered and fractured, much as the society of the Soviet Union was by political persecution in the 1960s. Voices such as Pasternakâs were routinely silenced by a system intolerant of dissidence.

Keywords Click a term to view the records with the same keyword
Abstraction
Glass
Modern(Contemporary)
Reflections (Surfaces)
Sound
Portfolio List Click a portfolio name to view all the objects in that portfolio
This object is a member of the following portfolios:

Your current search criteria is: Object is "Voices of Silence".