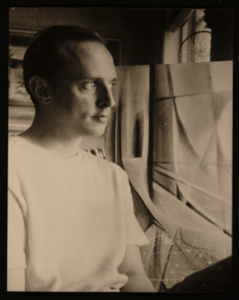 Jimmy Ernstâs art was forged out of sadness and confusion, and indeed he initially resisted becoming an artist at all. He was born Hans-Ulrich Ernst in Bruehl, Germany, the son of Dada/Surrealist painter Max Ernst (1891â1976) and Louise Amalia Straus, an art critic and journalist. His parents separated when he was two years old, and he spent his formative years traveling between his grandparentsâ and motherâs homes in Germany and his fatherâs Surrealist milieu in Paris. Because his motherâs family was Jewish, the young Jimmy was sent from Germany to the United States in 1938 to escape Nazi persecution. He came to America under the auspices of a printing firm with which he had apprenticed in Germany, and he slowly built a new life for himself despite speaking very little English and knowing few people. In 1941 his father (then married to the art collector Peggy Guggenheim) joined him, but his mother died at Auschwitz in 1944.

Art was not a career that interested Jimmy Ernst at first, perhaps because of the inevitable dynamic of competition that it established with his father and his illustrious circle. The younger Ernst never took an art lesson, but in the early 1940s he began to paint, building a style (and personal relationships) around Surrealist painters such as Kurt Seligmann (1900â1962), Matta Echaurren (1911â2002), and Gordon Onslow Ford (1912â2003), and the Abstract Expressionists, particularly William Baziotes (1912â1963). For a time in 1942, Ernst served as the director of Guggenheimâs Art of This Century Gallery in New York, and he later formed his own gallery. The Museum of Modern Art bought one of his paintings in 1943, thus establishing him as a leading artist in the New York art scene. Just before his death, he published a volume of memoirs, "A Not-So-Still-Life". (1)

Ernstâs earliest paintings were inspired by Surrealism. A group of monochromatic works followed in the 1950s. After negotiating several stylistic approaches, he began to paint works that break down the surface using small cell-like structures, which give the impression of a shattered, faceted substance, made tangible by refracted light. The cell forms coalesce to create complex patterns of interconnected designs. In his abstractions throughout his career, Ernst explored the theme of silence to express his feelings about political persecution and the failure of people and institutions to speak up against social injustice. (2)

Your current search criteria is: Artist/Maker is "Jimmy Ernst".