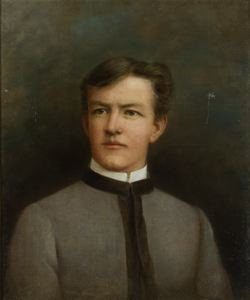 
Nicola Marschall was a native of Prussia who arrived in the Port of New Orleans in 1849. He travelled to the Alabama Black Belt, where he set up as a portraitist depicting members of the planter families who lived in central Alabama. Marschall's practice was centered in the communities of Greensboro and nearly Marion, which was also home to a military academy for boys. This portrait most likely documents one of the young men educated at Marion Institute.

Keywords Click a term to view the records with the same keyword
Portraits
Military
Male
Portfolio List Click a portfolio name to view all the objects in that portfolio
This object is a member of the following portfolios:

Your current search criteria is: Object is "A Marion Institute Student".