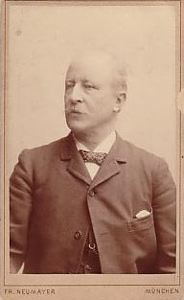 Nicola Marschall was born on March 16, 1829, in St. Wendell, Rhenish, Prussia. He was the son of Margaret Mohr and Emanuel Marschall, a wealthy tobacco manufacturer and wine merchant from St. Wendell. Little is known about Marschallâs early life, however, in an article about the artist in the "Montgomery Advertiser" from March 22, 1915, Marschall recalled that he played flute as a child. His father wanted him to go into the tobacco business, but Marschall left Prussia to pursue an interest in art and music at an early age. He traveled to Rome, Florence, Naples, Paris, London, Berlin, DÃ¼sseldorf and Munich. At some point in his childhood, he was hit in the head with a snowball, and as a result, his hearing was severely damaged. Because of his impairment, Marschall was excused from compulsory military service and he traveled to the United States in 1849.

Marschall sailed in April, arriving at the port of New Orleans in July. Several years later he recalled his journey: âI came over here on an old sailing vessel and well do I remember to this day how I had to draw the picture of every member of the crew from captain to humblest sailor.â (1) Upon his arrival, Marschall immediately traveled to Mobile, Alabama, where he stayed with a relative who attempted to persuade him to join the gold rush in California. Marschall, satisfied with the distance from his homeland, stated that he did not intend to travel any further, and remained in Alabama. After a short time in Mobile, Marschall settled in Marion, where he established a portrait studio and began teaching art and music. In 1851, he began teaching at the Marion Female Seminary. Marschall continued to take commissions while teaching at the seminary, as evidenced by an ad run in the "Alabama Beacon."(2) The ad mentions that the artist was in Greensboro specifically for commissions. Greensboro is approximately twenty miles from Marion, and therefore, suggests that Marschall was at times an itinerant painter, traveling to nearby towns in order to seek commissions. Since a complete study of Marschallâs works has yet to be written, it is difficult to determine exactly where and when he traveled, and it is difficult to ascertain the development of his portrait style. In any case, with the booming cotton-based, antebellum economy of Alabama's Black Belt region, there was certainly no shortage of customers for Marschallâs portraits.

Scholars have established that in 1857, Marschall returned to Prussia and remained in Europe for two years, continuing his art studies in Munich and Italy. He returned to America in 1859, once again settling in Marion. As art historian Lauralee Trent Stevenson quotes Marschall's reflections upon his social connections and their rewards in the days before the Civil War began:

"There I painted many portraits of the wealthy planters and members of their families as well as other prominent people of the South...Mrs. Napoleon Lockett, a beautiful southern woman of an old Virginia family and wife of a wealthy planter, lived in Marionâ¦Mrs. Lockett was as loyal a daughter as the south had and was much interested in its affairs then. She came to me one day and said, 'Mr. Marschall, we have seceded and the Confederate government wants a flag. Will you make us a design? It must not be too unlike the United States flag but different enough to be distinguished at a distance.'"(3)

Nicknamed the âStars and Bars,â Marschallâs design of âtwo red stripes and one white with a blue field bearing seven white stars indicating the number of states that had then seceded in the upper left hand cornerâ was adopted by the Confederate Congress on March 4, 1861. The flag was carried at the First Battle of Bull Run, where its resemblance to the âStars and Stripesâ confused soldiers in battle. After two years debate, the Confederate Congress would replace Marschallâs design with Beaureguardâs battle flag âStainless Bannerââa St. Andrewâs cross edged in white with thirteen white stars. However, the soldiers then mistook it for a flag of truce, and on March 4, 1865, it was replaced by the more familiar âStars and Barsâ which is recognized as the Confederate Flag today. (4)

The Civil War was the first war to be completely documented by artists. In the middle of the nineteenth century, the illustrated weekly newspaper was introduced as a news medium. "Harperâs Weekly" began in 1857, the "New York Illustrated News" was first published in 1859, and all were available in the South until the outbreak of the War, when mail service was cancelled. The Confederacy had one illustrated paper, "The Southern Illustrated News", published in Richmond, Virginia, but artists, engravers, presses, and especially money were in short supply. As a result, it printed very few illustrations and its' popularity was largely due to cartoons. The News was published between September 13, 1862 and March 25, 1865. (5)

According to Stevenson, the artists who interpreted the war with their sketches can be divided into three distinct categories. There were combat or sketch artists who worked for the northern illustrated newspapers; fighting men who served in the armed forces who, after the war, became working artists, drawing and painting war scene from sketches they had made at time of action or from recollection; and professional illustrators for the weekly magazines who relied on eyewitness sketches, photographs, and wartime lithographs using their imaginations to fill in the details. There were also talented amateurs who would sketch a house or surrounding landscapes of their encampments and enclose these sketches in letter to loved ones. (6) All of these artists played a vital role in recording the Civil War and their illustrations are indispensable to historians and scholars today.

When the War began, Marschall enlisted as a private in the Confederate army, and served off and on during the war. His record of military service states that he enlisted as a private of volunteers and was traveling with his command from Marion to Forts Morgan and Gaines at the mouth of Mobile Bay. He later enlisted in the 2nd Alabama Regiment of Engineers under the command of Lt. General Leonidas Polk. Reportedly, Marschallâs main duties were to make âsketches of Federal defenses, planning bridges, and fortifications.â(7) Marschall often provided the Confederate Army with a substitute for himself, of which three occasions have been recorded in military records. During his absences however, Marschall was still serving the cause, as he entertained injured and sick troops along with other musicians. (8)

After the war, Marschall continued to paint portraits and married a former student, Mattie Eliza Marshall, the daughter of Jubal Marshall, a Baptist minister and planter. The couple had three children: Emanuel, Kate, and Mannie. The devastation of the War inevitably had a detrimental effect on the artistâs portrait painting business. As a result, in 1873, the Marschall family moved to Louisville, Kentucky, a larger, wealthier community where commissions were more plentiful. The artist maintained a studio here until his death in 1917. Among his possessions found in his studio after his death were portraits he painted of Lincoln, and every president from Grant through Roosevelt. Most of his works remain in Southern private collections today.

(2) An advertisement he ran in the Alabama Beacon read: âPORTRAIT PAINTNG. The undersigned has the pleasure of announcing to the public, that he has visited Greensboroâ for the purpose of taking Portraits. He may be found in the Washington Hall, where he will be happy to exhibit specimens of his Painting. He pledges himself to give entire satisfaction to all who may favor him with their patronage.â

(4) The origin of the Confederate flag design is controversial, as Orren Randolph Smith of North Carolina has also been credited with creating the flag that was raised at the Confederate States Congress at Montgomery, Alabama on March 4, 1861.

(6) Some letters that survived can be viewed at the Museum of the Confederacy in Richmond, Virginia.

(8) Stevenson mentions that on January 21, 1863, he was in Selma playing music at the âbenefit of our Wounded Soldiers.â See Stevenson, p. 104.

Your current search criteria is: Artist/Maker is "Nicola Marschall".