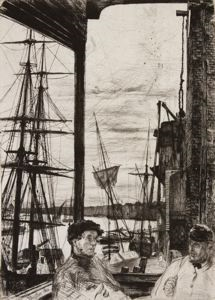 
Thoroughly entrenched in the avant-garde realist aesthetic of Gustave Courbet (French, 1919â1877), Whistler relocated from Paris to London in spring 1859. He soon discovered appropriate subjects along the docks of the Thames River. The artist sought to capture the quotidian activity of stevedores, sailors, and merchants among the ships, wharfs, and warehouses. In the foreground of "Rotherhithe," he depicted two men smoking pipes on the balcony of an inn overlooking the river. The degree of detail in their faces and figures is unusual in Whistlerâs print oeuvre, but the influence of Japanese prints on the tall, asymmetrical composition is typical of his work. Whistler included this image among "A Series of Sixteen Etchings of Scenes on the Thames and Other Subjects" published in 1871.

Becquet
1986.0003
Portfolio List Click a portfolio name to view all the objects in that portfolio
This object is a member of the following portfolios:

Your current search criteria is: Object is "Rotherhithe".