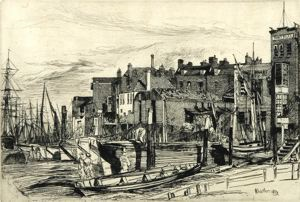 
Throughout "A Series of Sixteen Etchings of Scenes on the Thames and Other Subjects" published in 1871, Whistler used the untouched parts of the plate as a foil for the darker areas to give contrast and depth to his images. In "Thames Police (Wapping Wharf)," which is named for the sign on the building on the far right, he labored on the variety of walls and roofs, alternating parallel lines with crosshatching, creating a mosaic of the urban fabric while limiting the sky to a few wispy marks that suggest clouds.
See "Fleeting Impressions: Prints by James McNeill Whistler," exh. cat. (Montgomery: Montgomery Museum of Fine Arts, 2006),16.

Becquet
1986.0003
Portfolio List Click a portfolio name to view all the objects in that portfolio
This object is a member of the following portfolios: