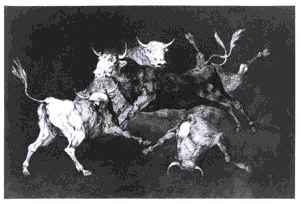 Your current search criteria is: Object is "Rain of Bulls (Lluvia de toros)".