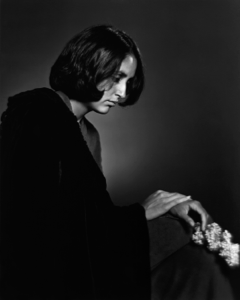 Baez started her career as a folk singer in coffee houses around Boston and hit the national stage barefoot at the first Newport Folk Festival in 1959. By 1969, when she performed at Woodstock, she had recorded ten albums ranging from folk and protest music to Christmas carols and concept albums involving word poems. She was committed to civil rights, Vietnam War resistance, and non-violence. Baez was one of few members of the 1960s counterculture photographed by Karsh, who said she was âamong the most natural of all the performers I have photographed.â

Keywords Click a term to view the records with the same keyword
Portraits
Female
Musician
Portfolio List Click a portfolio name to view all the objects in that portfolio
This object is a member of the following portfolios:

Your current search criteria is: Quick Search has baez.