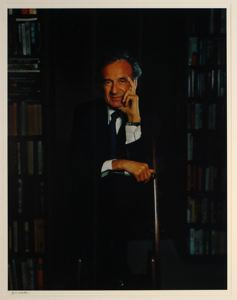 Wiesel was the author of 57 books, a political activist, and a Holocaust survivor. Night, his succinct, powerful memoir about his experience in the death camps and its toll on his faith, has been published in more than 30 languages and has sold more than six million copies.

Karsh included the portrait he made of the prolific author in his book-lined study when he published American Legends in 1992. Wiesel had won the Nobel Peace Prize in 1986 and had achieved international fame as an advocate of human rights. He has continued to travel, lecture, and teach.

Keywords Click a term to view the records with the same keyword
Portraits
Male
Book
Suit
Humanities
Portfolio List Click a portfolio name to view all the objects in that portfolio
This object is a member of the following portfolios:

Your current search criteria is: Quick Search has Elie and [Object]Display Artist is "Yousuf Karsh".