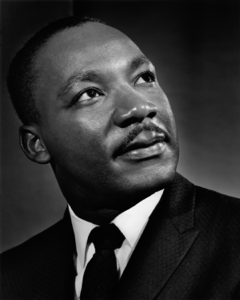 
Martin Luther King, Jr. (1929â1968) The Reverend Doctor Martin Luther King, Jr. was an eminent African-American minister and advocate for social justice during the Civil Rights Movement. In August 1962 Karsh rushed to Atlanta, where King was co-pastor with his father of Ebenezer Baptist Church, to photograph King for a national publication. The pictures were made just days after Kingâs brief incarceration in Albany, Georgia with other peaceful protesters of the cityâs segregation laws. Karsh wrote, âI found him tired, but harboring no hatred, not even disapproval. He sought only justice; that he and his people should be treated as first-class citizens.â

Your current search criteria is: Quick Search has martin, luther and king.