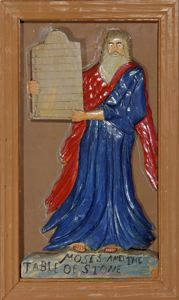 Moses and the Table of Stone


Elijah Pierce was a member of the earliest generation of twentieth-century self-taught African-American artists whose work was documented in the seminal exhibition "Black Folk Art in America" in 1982. Pierce, originally from Mississippi, lived and worked for most of his life in Columbus, Ohio. Employed as a barber, Pierce was also a preacher, and his religious experiences colored his work and his subjects for most of his career as an artist. He told a reporter in 1979, "My carvings look nice, but if they don't have a story behind them, then what's the use? Every piece of work I carve is a message, a sermon."*

"Moses and the Table of Stone" is an image familiar from the story of Moses in the Old Testament. When Moses went to Mount Sinai and encountered God in the burning bush, he was given the Ten Commandments, which he then transmitted to the Jews as the primary law of Judaism, and later Christianity.

Keywords Click a term to view the records with the same keyword
Old Testament
Religious Figures
Portfolio List Click a portfolio name to view all the objects in that portfolio
This object is a member of the following portfolios:

Your current search criteria is: Keyword is "Z".