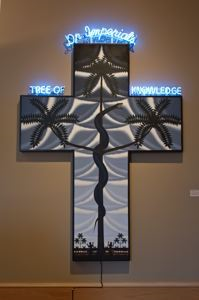 Medium and Support: Oil on canvas with neon
Accession Number: 2011.0016


Currently On View
Copyright: Courtesy of The School of the Art Institute of Chicago and the Brown Family


Although often grouped with the Chicago Imagists, Brown's oeuvre sits uneasily within this categorization. In fact, his work stretched beyond their stylistic constraints to occupy a place that is uniquely his. Brown created narrative images based on recognizable vernacular imagery. His individual style encompasses certain hallmarks: use of pattern, strong angles and a shifting perspective often rendered in a palette primarily consisting of grey, pine green, black, yellow, white, and light blue all bordered by black outlines. Though referencing reality, his works are very stylized. In a sense, Brown is a history painter, recording a distinctly American landscape. "Dr. Imperialâs Tree of Knowledge," 1985, a later work that revisits his earlier interest in the cruciform (seen in a series Brown began in 1975) also connects to a series of paintings Brown began in 1981 exploring Bible stories. Here Brown depicts a snake encircling a palm-like tree bracketed by two forms representing Adam and Eve in front of the Tree of Knowledge. While this work has a basis in a Bible story Brown also invests this work with layered meanings. A very personal work, "Dr. Imperials..." references such illnesses as cancer and HIV/AIDS as well as the way that religion and medical science addresses these diseases.

With Neon Sign Off
Portfolio List Click a portfolio name to view all the objects in that portfolio
This object is a member of the following portfolios:

Your current search criteria is: Keyword is "Z".