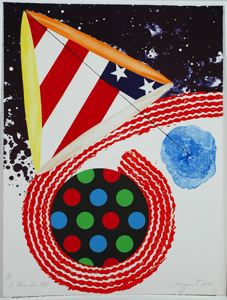 A Free for All

1976
An American Portrait, 1776â1976: 33 Contemporary Masters Join in a Trilogy Celebrating the Bicentennial


A leading Pop artist, James Rosenquist began his career in the graphic arts, creating signs and billboards. Moving away from the commercial world, Rosenquist began bringing together and collaging disparate images inspired by popular culture into enormous paintings.

In addition to painting, Rosenquist also dedicated himself to printmaking. The lithograph, "A Free for All," 1976, created during America's bicentennial, is a continuation of many of the ideas he investigated in the 1960s and incorporates several of Rosenquist's personal symbols: the American flag and tire tracks. Unlike many Pop artists, Rosenquist dealt directly with political themes and situations. "A Free for All" relates to the artist's personal views regarding the Vietnam War and the emerging Space Program. Two subjects dominating the news in the 1960s and into the 1970s that Rosenquist held strongly negative feelings about.

Keywords Click a term to view the records with the same keyword
Geometric
Flag
Portfolio List Click a portfolio name to view all the objects in that portfolio
This object is a member of the following portfolios:

Your current search criteria is: Keyword is "YV".