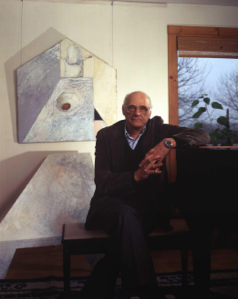 
Arthur Miller (1915â2005) Miller was born to immigrant parents in New York City and was profoundly affected by his fatherâs struggles during the Depression. He worked to save enough money to attend the University of Michigan, where he began writing plays. Miller often wrote family dramas concerned with the American working class and the reality of the American Dream. He is most famous for Death of a Salesman, a tragedy of classical proportions based on an ordinary man. Miller won a Pulitzer Prize in 1949. In the early nineties several new Miller plays were produced reviving interest in his entire career.

Keywords Click a term to view the records with the same keyword
Portraits
Male
Eye Glasses
Bench
Window
Humanities
Watch
Portfolio List Click a portfolio name to view all the objects in that portfolio
This object is a member of the following portfolios: