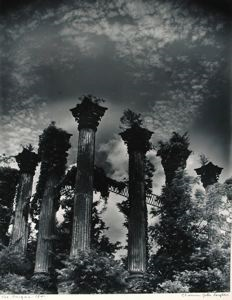 
This photograph is typical of Laughlin's work depicting the American South and its culture. Its subject, a plantation house in ruins, reflects the project he began in 1939 to photograph plantation architecture before it vanished completely. As well, the unusual angle from which the ruin is photographed, and the mood of reverie, nostalgia, and unexplained mystery which result, indicate that Laughlin had begun to experiment in earnest with his theories on the Third World of Photography. The ruined house is photographed in such a way that it is an interesting object in itself, but also serves to suggest larger, more intangible issues and meanings. Laughlin achieves this effect through careful balance and emphasis on the 'purist' elementsâsuch as tone and textureâcombined with a composition that distorts the viewer's sense of the familiar, and thereby suggests the presence of concepts beyond the everyday.

Laughlin's caption for "The Enigma" (#M-45), reads: "Windsor Plantation, near Port Gibson, Mississippi, was nearly burned during the course of the Civil War, but survived only to be destroyed by a fire of unknown origin in the 1890s. Here, the clouds hang like a question mark over the mystery of the ruins, whose tremendous plastered brick columns are crowned by huge cast-iron capitals. From the cores of the brick columns young trees sprout, the whole structure suggesting an incredible upsurge of Classical civilization, somehow completely lost in time and space."

Keywords Click a term to view the records with the same keyword
Landscapes
Ruins
Columns
Portfolio List Click a portfolio name to view all the objects in that portfolio
This object is a member of the following portfolios:

Your current search criteria is: Keyword is "XG".