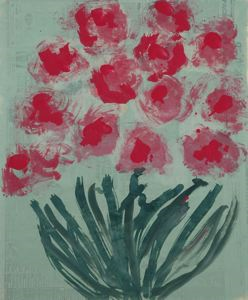 
Since her discovery in the late 1960s, Sybil Gibson's work has been exhibited in over 50 one-woman shows. She has been called a "naive" or "primitive" artist because she is essentially self-taught. Faces, flowers, and female figures, particularly little girls, are common elements in her works, though her compositions vary widely in mood from innocent to disturbing.

The painting in the MMFA collection is from Gibson's "late period", after cataract surgery. Works from this time retain the general characteristics of Gibson's earlier works, particularly minimal backgrounds and a lack of detail. Flowers were common subjects throughout Gibson's career though she concentrated on them more heavily in her late works.

Your current search criteria is: Keyword is "W" and [Object]Display Artist is "Sybil Gibson".